0
DANCING On Ice stars broke coronavirus rules last night by failing to wear face masks in their taxis home. Contestants Billie Faiers, Jason Donovan, and Lady Leshurr, as well as host Phillip Schofield were pictured without coverings as they left the the first live show. 9 Some Dancing On Ice stars failed to wear face…

Contestants Billie Faiers, Jason Donovan, and Lady Leshurr, as well as host Phillip Schofield were pictured without coverings as they left the the first live show.

Some Dancing On Ice stars failed to wear face masks in the back of their taxis homeCredit: James Curley

Denise Van Outen’s mask hung from one ear as she tucked into a bag of crisps following her emotional performance.

Holly Willoughby wore a black face mask as she spoke on the phone in the back of a luxury car.

The Government website states that failure to wear a mask in a taxi or private car is in breach of the law and could be punished with a fine.

People with face mask exemptions are free to ride without them.

Billie Faiers took some flowers home with her after the first live showCredit: James Curley

Lady Leshurr in the rear of a car on her way homeCredit: James Curley

Jason Donovan is among the show favouritesCredit: James Curley

Denise Van Outen’s mask hung off one ear while she had a snackCredit: James Curley

Drivers, one of which was pictured last night wearing a covering, can refuse to accept a fare if they aren’t wearing a mask.

All the celebs appeared to be sitting in the rear left passenger seat, which is the suggested place to sit in a cab during the pandemic.

The show has been criticised in recent days for putting unnecessary extra strain on the NHS during the coronavirus pandemic after several injuries.

In Sunday’s premiere episode, viewers saw how multiple competitors – both celebrity and professional skaters – were rushed to A&E after accidents in rehearsals.

Early in the show former Olympic skier Graham Bell admitted he felt “so guilty” after partner Yebin “lost a chunk of her leg” when he fell over and cut her.

Graham Bell watched over his pro partner Yebin after he cut her legCredit: PA:Press Association

Denise fell to the ice and Matt landed heavily on top of her, and she had to go to the hospital.

The 46-year-old actress refused to let her painful injury force her out of the competition, and viewers were blown away by her commitment as she performed on Sunday.

A preview video before their performance, saw Andy flipping Rebekah over his arm when her skate’s blade connected with his face.

The blade left a huge gash right by his nose, which hospital staff decided to tape up rather than close with stitches.

Dancing On Ice viewers were enraged the show would put any extra burden on the NHS during the coronavirus pandemic, calling it “irresponsible”.

Another added: “it’s a bit strange that they all keep going to casualty. A bit inconsiderate to the NHS at this time, surely.”

And a third said: “Just watched first episode of Dancing On Ice. Two people had to go to A and E because of skating accidents. Our NHS is pushed to capacity at the moment. Surely skating isn’t essential just now !!” 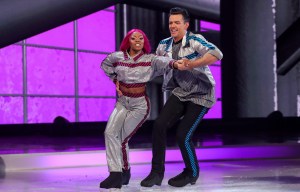 Did anyone leave Dancing On Ice last night? 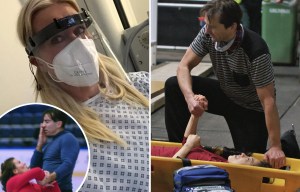 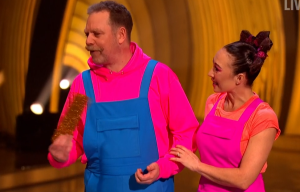 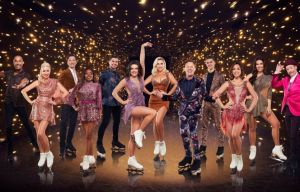 Dancing on Ice 2021 couples – Meet the celebrity and professional pairings 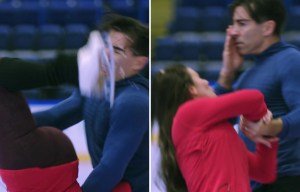 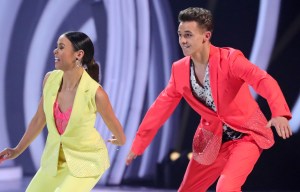 The first episode came after NHS England’s top boss today revealed someone is being admitted to hospital with coronavirus “every thirty seconds”.

Chief Executive Sir Simon Stevens refused to “sugar coat” the “staggering” figures as he warned both hospitals and staff are under “extreme pressure”.

He said there have been 15,000 more hospital in-patients across England since Christmas Day, adding: “Staggeringly, every thirty seconds across England another patient is being admitted to hospital with coronavirus.”