0
Extraordinary, ground-breaking, devastating. Decadent, verbally vicious, and a loyal and generous friend. He was the toast of the art world and maker of what was once the most expensive painting on the planet; but what do we really know about Francis Bacon? It has been recorded that the Irish-born artist, who died in 1992, was…

Extraordinary, ground-breaking, devastating. Decadent, verbally vicious, and a loyal and generous friend. He was the toast of the art world and maker of what was once the most expensive painting on the planet; but what do we really know about Francis Bacon? It has been recorded that the Irish-born artist, who died in 1992, was entirely self-taught, was dedicated to art from the outset, and met his lover George Dyer when he caught the petty criminal breaking into his studio.

Many of these “facts” are wrong.

It takes a certain kind of confidence to call a biography “Revelations”, particularly when the bookshelves on your subject are already pretty crowded. But would it surprise you to discover that Bacon spent time as an interior and furniture designer, took drawing lessons in Paris, and in reality met Dyer in a bar? Ten years in the making, Revelations, by Annalyn Swan and Mark Stevens, goes back to Bacon’s beginnings, and sets the record straight.

Biography makes lives make sense, or at least attempts to make sense of lives. It satisfies our need to apply story and meaning to the chaos, half truths and outright lies of life. Reading through Revelations, the thread emerges of the search for a moment, or a chain of events that led to the sparking of Bacon’s genius.

“It’s never just one thing,” says Stevens, formerly art critic for Newsweek and New York magazine. Possessed of a lively dry wit, Stevens describes Bacon’s childhood in Ireland, and the inevitable traumas of growing up homosexual and asthmatic at the hands of his English father, who believed in the therapeutic powers of beatings and horses.

Ireland during the War of Independence and Civil War also figures, and the authors step as lightly as possible across difficult histories, presenting them as a background to Bacon’s sense of otherness. 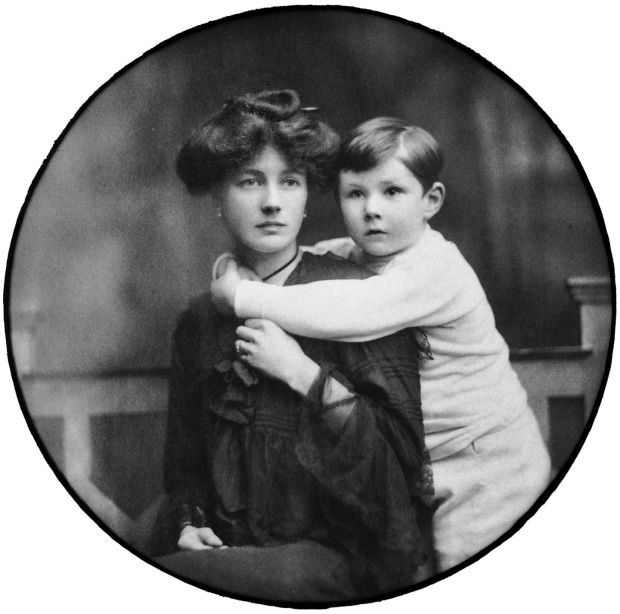 Francis Bacon at about age four four with his mother Winnifred Bacon. Courtesy the Estate of Francis Bacon 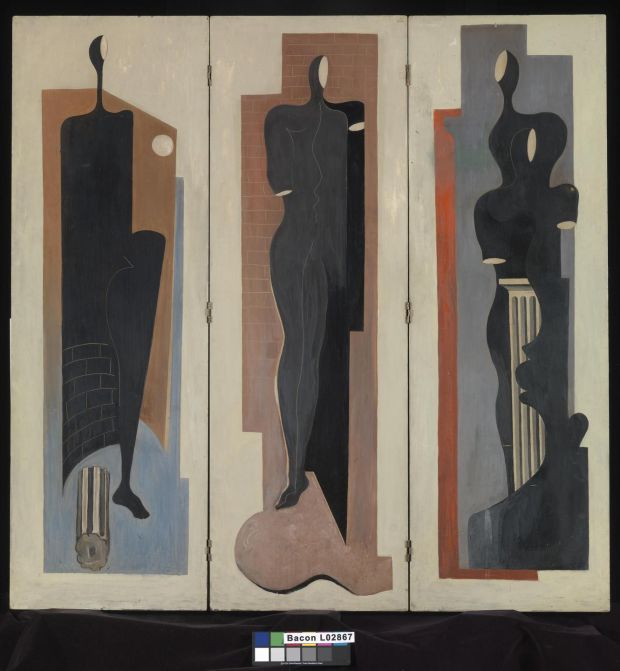 
Ultimately, Bacon developed a lifelong and intense antipathy to Ireland, responding at one point to an invitation to exhibit at the Douglas Hyde Gallery in the 1980s with a negative, yet charming letter explaining that he would never return to this country.

“Just because you close a door, it doesn’t mean the room behind it can’t be very interesting,” says Stevens. “If you don’t open it, it can become haunted.”

“I was really attracted to the Irish angle,” adds Swan, who describes research trips to Ireland, where the pair met members of Bacon’s extended family, sharing recollections and insights into the fading world of Big House culture.

Destroying a great deal of his own work, erasing whole chapters of his life, and issuing contradictory pronouncements, Bacon is elusive, even as his surviving work punches you in the stomach with its immediacy. Behind that immediacy the work is also enigmatic; troubled with complex, conflicted and often brutal movements.

“People ask, ‘isn’t it depressing to spend 10 years with this very dark artist?’,” says Stevens. “But the answer is no. He also liked life. He loved drinking, going out, he was a great gambler, he said many funny things.”

“There was a lot of spark,” says Swan, a former arts editor at Newsweek, and a teacher of biography.

A spark like Bacon’s can also be a curse. Life is difficult for those whose skins are thin, and whose minds seldom find rest. “He was wound very tightly,” says Stevens. “Like many artists, he didn’t have filters. And he was shy, lonely and often very ill, so he created this persona.”

In that, Bacon was helped by the fact that he was naturally incredibly charming and, in his youth, extraordinarily physically beautiful. For those of us familiar with the lined, round-faced Bacon of his most famous older years, he had had a beauty that the authors describe as “almost feminine . . . an allure so delicate . . . ” In 1927 he was stopped in a Berlin street by photographer, Helmar Lerski, who asked him to sit for a portrait.

Most of the existing writing on Bacon, unsurprisingly dwells on his louche Soho years, when he rubbed shoulders and clinked glasses with the famous, luminous, the utterly grubby and the downright dangerous (in the shape of the notorious Kray twins). Instead, Revelations takes us to Ireland, from there to Bacon’s (very brief) schooling in England, and on to Berlin and Paris.

Francis Bacon, Three Studies for Figures at the Base of a Crucifixion, 1944.  Photograph:  Tate Images. Courtesy the Estate of Francis Bacon


At that time Picasso, whose own exhibitions, triumphs and breakthroughs haunt the book, would have visibly present in the cafés, but Bacon, inspired by the work of Marcel Breuer and Eileen Gray, instead became a designer. In 1930, a spread in The Studio magazine was devoted to his design. His furniture owed an evident debt to Gray, but he was also painting, searching for a style. His Painted Screen from around 1930 is clearly in thrall to the style of Mainie Jellet. 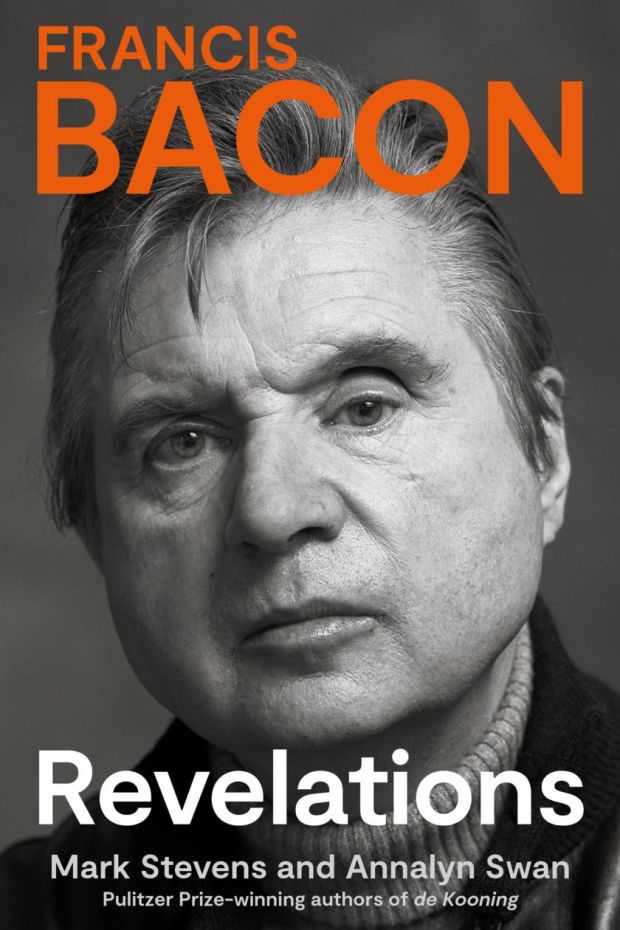 In 1934, Bacon was still proud enough of his design work to send an article to his mother, celebrating “a very remarkably modern dining-room”. The room, for wealthy clients, had white walls, stools instead of chairs, and white rubber curtains. Not long after, Bacon would expunge all record of his time as a designer, and a short decade later, as the second World War raged, he would stun, and ignite the art world with his Three Studies for Figures at the Base of a Crucifixion (1944).

Swan and Stevens explain this erasure as the artist’s desire to control his image, arising in part from the early experiences of being gay in a world in which it was still illegal, and so learning “to present a carefully composed face to the world”. Coupled with this was Bacon’s need to be seen as emerging “miraculously as an artist, as if sprung fully formed from the head of Zeus.  This,” the authors write, “was not untrue by his lights; he was simply emphasising the emotional truth concealed by the deceptive facts.”

Sifting through these deceptive facts is tricky work, expertly managed by the authors. Psychology, they agree, is a useful tool, but it is far better, says Stevens, “to show rather than tell. You want the reader to put it together.” 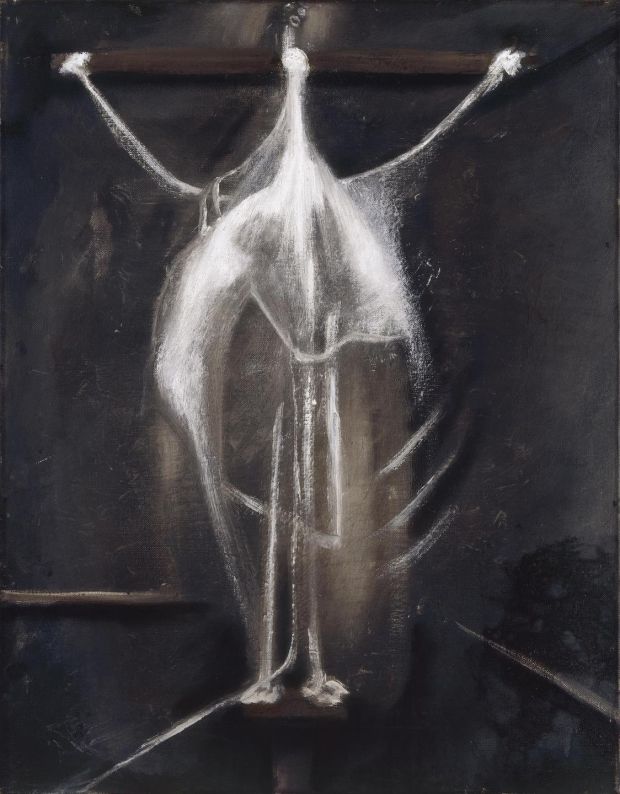 
Another key moment, they agree, was Bacon’s reading of Irish scholar WB Stanford’s 1942 book on the Greek dramatist Aeschylus. “It was probably pivotal in giving Bacon the courage to do what he did.” Stanford’s Aeschylus was, according to Stevens, “a raw unfinished person with tempestuous emotions, not polished for tea parties like Sophocles.” “When Bacon says ‘he’s kind of interesting’,” concludes Swan, “you know the influence was huge.”

A couple in life as well as work, Swan and Stevens describe their decade-long project as a little like a marriage itself. Their previous biography of Dutch-American artist Willem de Kooning earned the pair a Pulitzer. Which of their subjects would they prefer to have a drink with?

“I’d rather go for a pint with de Kooning and dinner with Bacon,” says Swan, laughing at the question. “The theatrical Bacon, he always knew he was the most important person in the room, until he got too drunk.”

“Bacon,” agrees Stevens. “He would order the most expensive bottles of wine, and he always paid.”

Those expecting lurid descriptions of Bacon’s masochistic sexual proclivities, and titivating accounts of his interactions with the glitterati should look elsewhere. These are not absent from account, but they are not lingered on or pruriently pawed over. Instead, the book is threaded with subtle yet vital insights into how the art world itself operates, and how the artists, writers, makers, moneyed movers and shakers of a particular time in history come together, influence or ignore one another, argue, befriend and fall out, and in the course of it all, change art and cultural history.

That world is revealed to be brittle, uncomfortable, and populated with the beautiful, the broken and the misfit; but also held together by brilliance, glitter and charm. 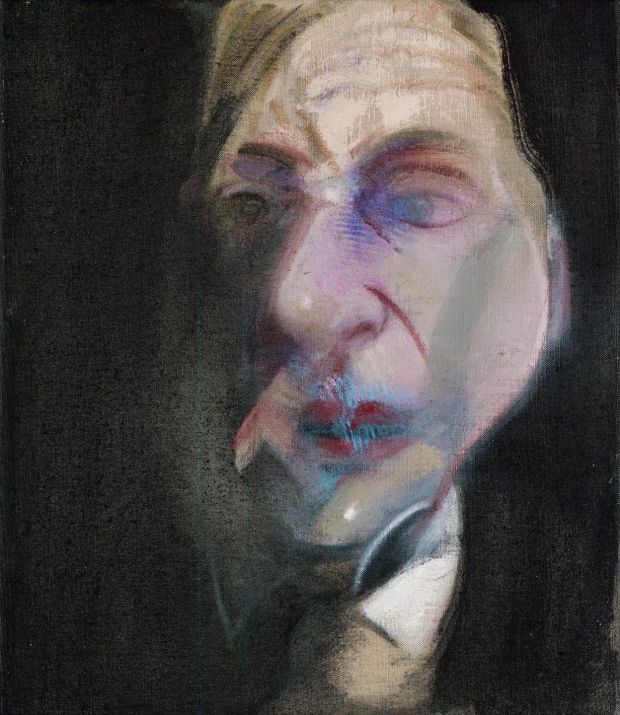 
Throughout, Bacon’s own words, as misleading as they may sometimes be, add powerful poignancy. “I am sick to death of everything I’ve ever done in the past but continue to think like a child or a fool that I’m on the edge of doing a good painting,” he once wrote to fellow artist Graham Sutherland.

The Bacon that emerges from the pages of Revelations is still an enigma. A reason for this, alongside his own self-mythologising, is the fact that today he has become a brand.

“An enormous amount of new money has come into the art market,” says Stevens, explaining the sky-rocketing of Bacon’s prices. Celebrity buyers such as Roman Abramovic inflate prices, powerful museums think they need an example, and soon it is difficult to separate the aura of obscene amounts of money ($142.4 million for Bacon’s Three Studies of Lucien Freud, at auction in 2013) from the raw art work in front of you.

Bacon himself had similar difficulties with the layers of context and meaning that get applied to art. Art is not always rational, and the impulses behind it not always open to language. That’s why, when it works, it’s so damn powerful. These ideas emerge, with a delicate subtlety throughout the book. And yet Bacon’s profound need to own his own story makes such an in-depth biography uncomfortable reading at times.

It’s  similar to the discomfort I feel about the Bacon studio at Dublin’s Hugh Lane. Bacon tidied his studio up a little before he left for what would prove to be his final journey to Spain in 1992. His sole heir, John Edwards, later held parties there, and items were certainly removed.

So what are we seeing when we look through the peepholes to the forensically reconstructed space, presented in a country the artist wanted nothing to do with? “It’s like an art installation,” says Stevens. “It has a strange aura, its quite powerful. Like you’re looking through portholes. And this feeling that it’s a reliquary, there’s a religious fetish to it . . .”

Try as you might, you don’t get to choose your own legacy. You can shape, hide, and yes, lie, but the world takes what it wants, and Francis Bacon is a highly compelling subject. Most recently, Max Porter’s novel The Death of Francis Bacon attempts to imagine inside Bacon’s mind at the end of his life, and a major exhibition of Bacon’s work (Man and Beast), due to open at the Royal Academy in London on January 30th, was postponed due to Covid.

This gives you time to read Revelations, all 700-plus pages of it (and that’s before you get to the footnotes), while you wait for the world to settle down, and then go out and look at Bacon’s work anew.

Revelations is published by William Collins