Insight: I fell down the rabbit hole of the ‘drivers license’ drama

0
Photo by Mickey Calata | The State Press “The drama of this past romance is played out over songs and music videos, and frequently features an automobile.” Illustration published on Wednesday, Jan. 27, 2021. By Sabrina Kenoun | 01/27/2021 8:45pm If you were a fan of old school Disney Channel, you probably remember the Nick… 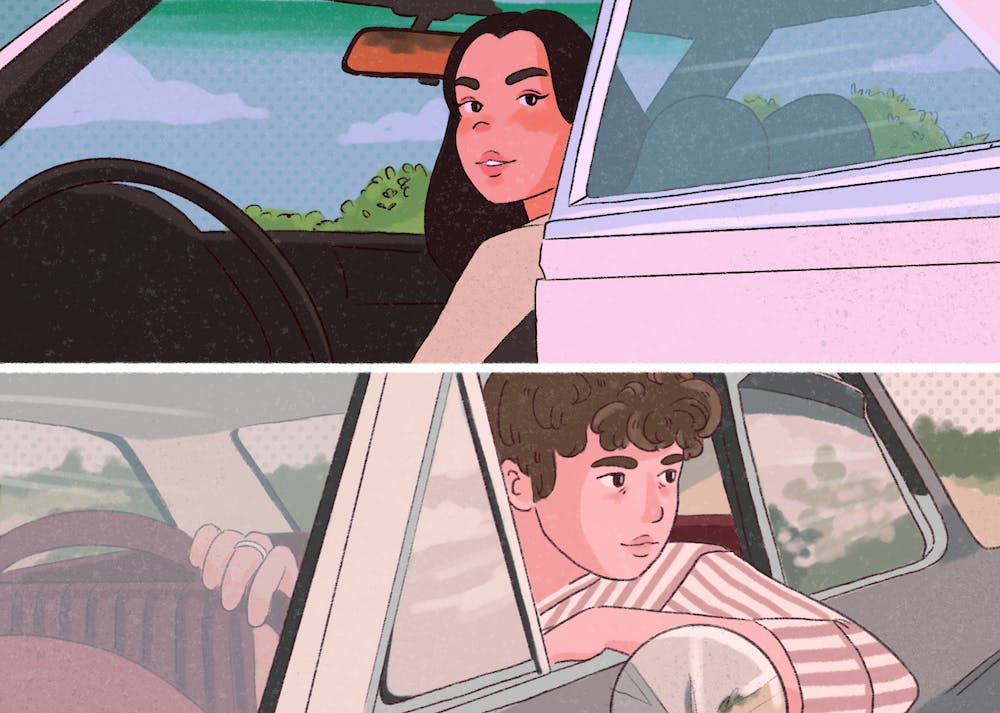 “The drama of this past romance is played out over songs and music videos, and frequently features an automobile.” Illustration published on Wednesday, Jan. 27, 2021.


If you were a fan of old school Disney Channel, you probably remember the Nick Jonas, Miley Cyrus and Selena Gomez love triangle well.

And it seems like that kind of drama never goes away, especially after Olivia Rodrigo and Joshua Bassett moved into the spotlight just a few weeks ago.

The saga began on Jan. 8 when Rodrigo, 17, star of “High School Musical: The Musical: The Series” released her debut single “drivers license,” a Taylor Swift-esque heartbreak ballad about a boy she still loves — whom fans think is co-star Bassett — despite him moving on with someone else: fellow Disney Channel star Sabrina Carpenter, as hypothesized by the Internet.

Now, the song has been No. 1 on the Billboard Hot 100 for two weeks, and has absolutely exploded on platforms like TikTok and Twitter.

About a week after Rodrigo’s track was released, Bassett dropped his own single “Lie Lie Lie,” which is about a previous relationship he had, similar to his apparent recent romance with Rodrigo.

And on Jan. 21, Carpenter released “Skin,” which is centered around the criticism of her rumored relationship with Bassett and a possible reaction to “drivers license.”

Needless to say, fans have taken to this drama in a frenzy, rushing to Rodrigo’s defense and praising her for such a hard-hitting ballad.

At first, I thought Rodrigo’s song was just another song TikTokers had dragged from the trenches for some new trend, but then I came across a millennial TikTok user who was deeply interested in the drama, despite not knowing who anyone in the love triangle was.

The last time I was invested in Disney Channel drama this juicy, I was 10 years old. I was so enthralled with the Nick, Miley and Selena situation. And every sideways glance or subtle back-handed comment had me on the edge of my seat.

Here I am in 2021 feeling the same as I did 10 years ago, paying attention to celebrities who are younger than me, who I didn’t know existed until this month.

The whole ordeal is so reminiscent of Cyrus’s “7 Things,” which she wrote about Nick Jonas after he broke up with her to date Gomez — who was Cyrus’s close friend at the time. The biggest difference now is Carpenter and Rodrigo are practically strangers, so their digs seem a bit much.

And that’s why “Skin” bothers me.

People have speculated whether “Lie Lie Lie” is actually about Rodrigo, but Bassett has denied this. So, aside from a maybe ill-timed release, he is probably in the clear when it comes to clap backs.

But there is just something wrong about what Carpenter did. Responding to someone else’s heartbreak with lines as petty as “you can try, to get under my skin/while he’s on mine,” or saying “maybe blonde was the only rhyme,” only makes her intentions clearer.

I hope I’m not the only one who thinks this, but if you’re going to be petty, at least don’t make it obvious.

What’s even more annoying is Carpenter came out and said she “wasn’t bothered” by “drivers license,” but let’s be real: If you’re writing a song in response to it, you’re definitely bothered by it.

In spite of the childishness of all this, it’s safe to say I, and most of the Internet, am here for the memes and TikToks in Rodrigo’s favor.

Whether it’s people reading off Twitter compilations, live reactions to the song, or girls singing it in front of their boyfriends to get a reaction out of them, they’re all pretty hilarious.

I’ve spiraled down the rabbit hole of this drama, and I can’t seem to get out. Every time I open a social media app, I instantly get notifications about more news or another conspiracy theory claiming this whole situation was a publicity stunt.

But no matter whose side you’re on, we should appreciate the fact that we have memes, two new songs to make fun of and a bop that will live on until the next generation of Disney Channel star drama takes place.