0
CLOSE Kid Rock performs to close his his virtual 50th birthday hangout, streamed from Whites Creek, Tenn., on Jan. 17, 2021. (Photo: Screengrab/Kid Rock Birthday Hang) The party was a little more intimate than the king-sized concert he threw in Detroit a decade ago. But there was a big dose of goodwill as the Kid Rock…
CLOSE

The party was a little more intimate than the king-sized concert he threw in Detroit a decade ago.

But there was a big dose of goodwill as the Kid Rock marked his 50th birthday Sunday night during an online event, raising about $200,000 for a fund supporting restaurants and bars imperiled by the COVID-19 pandemic.

Streaming live for fans during a digital hangout, Rock was joined in person by a few dozen family members and friends — including Motley Crue’s Vince Neil, country stars Jake Owen and Jon Pardi, and former Detroit Red Wing Chris Chelios — for a celebration at his Cowboy Town ranch north of Nashville.

Two weeks after contributing $100,000 of his own to the Barstool Fund, a Barstool Sports campaign that has generated more than $27 million for ailing establishments, Rock encouraged viewers Sunday to donate if they had the means. Toward the end of the 75-minute stream, he said the evening’s total was closing in on $200,000.

Sunday’s birthday show was a last-minute affair, Rock said — conceived and quickly arranged in about a week. He warned early on the virtual event might be “a train wreck” as he confessed to being nervous and navigated a handful of technical glitches.

He had just made what he described as “the most politically incorrect entrance of all time,” arriving in a “Dukes of Hazzard”-inspired General Lee Dodge Charger with a Coors Light beer in hand. 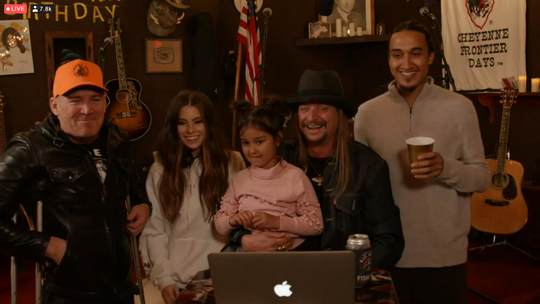 But Kid Rock stressed he wouldn’t be talking politics on a night that ought to be focused on the “people have been struggling during this damn pandemic, this whole mess,” he said.

The night closed with a deep country-music dive by the “Batwitdaba” star: a fiddle-laced performance of Webb Pierce’s “I Aint Never.” He also gave an updated 50th-worthy take on John Eddie’s bawdy birthday song “Forty.”

He revealed he had hoped to release a 50-song “triple album” in 2021, made up of 10 hip-hop tracks, 10 country tracks, 10 rock tracks and 20 previously unreleased recordings. The album was to be followed by a 50-city tour kicking off at Detroit’s Ford Field, possibly his final major road outing.

Those plans were derailed by the pandemic shutdowns and have been pushed to 2022, Rock said.

While saying it will be probably be his last big tour, Rock emphasized he hesitates to bill it as a farewell run. Referencing the litany of broken goodbye promises from other rock acts over time, he said he doesn’t “want to sucker everybody in” if he were to head out again years later.

It echoed a theme Kid Rock has teased at in recent years: He’s getting too old for the kind of high-flying showmanship that long marked his live concerts.

“I don’t want to be Mick Jagger up there,” he said. Noting that he’s been battling neck and knee issues, he said of his planned 2022 tour: “I will say that’ll be the last time you can see me at my peak.”

Rock spent most of Sunday’s program giving fans a taste of his new songs, many of them recorded in his new Nashville studio during the pandemic downtime.

It included a heavy, “American Bad Ass”-style track strapped over music from “Don’t Tell Me How to Live” by the Ontario band Monster Truck. Rock said he wrote the lyrics while feeling attacked in recent years: “Every opinion has a millennial offended,” one verse went.

Other new tunes included the Muscle Shoals-inspired “My Kinda Country” — cowritten by Eric Church — and the grinding “She’s Your Baby, Now Rock Her,” inspired by a line of personal advice from Loretta Lynn while Kid Rock was squabbling with his fiancée Audrey Berry.

It was 10 years ago this weekend that the Michigan-born rap-rocker staged the biggest hometown concert of his career: a star-studded, three-hour 40th-birthday celebration at Ford Field for a crowd of 60,000.

Joining him onstage that night were guests such as Sheryl Crow, Martina McBride, Anita Baker and Rev. Run. There were well-wishes via video from the likes of Jay Leno, Jon Stewart and Conan O’Brien. As he commanded the Ford Field stage for an audience full of Detroit sports, political and entertainment VIPs, Kid Rock was the toast of the town.

Looking back to that Detroit party in 2011 might feel like a glimpse into a bygone era. Kid Rock is now based in Nashville, for starters. He’s had his share of recent verbal battles with the Detroit he once proudly embraced. And the intense political divisions that have sunk in across the country meant the vocal Donald Trump supporter was unlikely to get public well-wishes Sunday from any network late-night personalities.

More: Kid Rock is still Kid Rock — it’s the culture that has changed since he hit the scene

More than anything, though, the realities of the pandemic spelled a different sort of birthday celebration. Sunday night’s birthday stream came off homespun and organic.

“My first love is Michigan, always will be, but I’ve got kind of a (fondness) for Nashville,” he said, later adding: “It’s been fun getting to know the good old boys down here. Just salt-of-the-earth people.”