Mumbai (Maharashtra) [India], December 13 (ANI): Veteran actor Raj Babbar on Sunday remembered his late wife and iconic actor Smita Patil on her 34th death anniversary and penned a heartfelt note to mark the day.
The ‘Nikaah’ star took to Twitter and shared a beautiful picture of Patil, dressed in a black printed saree.
“You were just 31 when you left us. The short pathway of memories you walked, left so many indelible impressions that your absence isn’t easy to believe,” wrote Babbar. 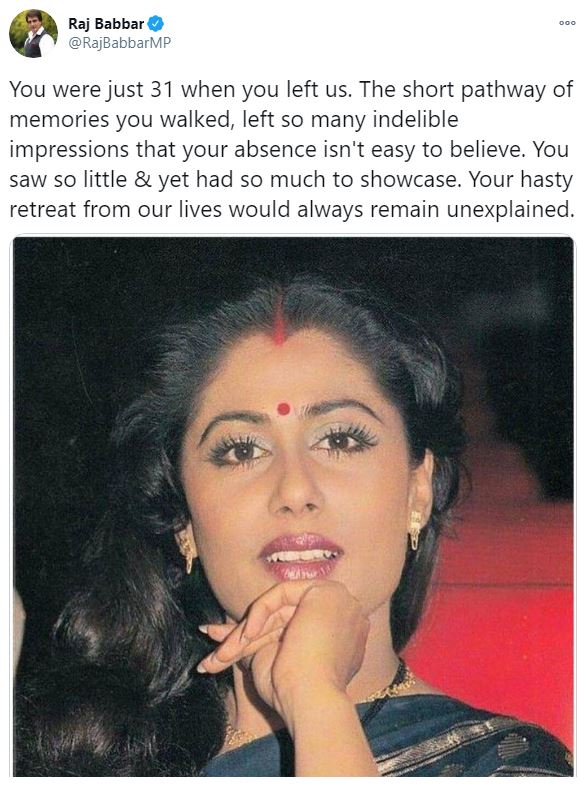 “You saw so little & yet had so much to showcase. Your hasty retreat from our lives would always remain unexplained,” he added.
The ‘Ardha Satya’ star’s son Prateik Babbar, too, remembered Patil and penned a heartfelt note with a gorgeous monochromatic picture of the late star.
“34 years ago today my mother left us…,” he started the note with a broken heart emoji.

“Over the years.. iv tried to imagine & create the perfect image of her.. in my mind & heart.. we’ve arrived at a very special place.. a very precious place.. now.. she’s the perfect mother.. the perfect woman.. the perfect role model.. the apple of every little boys eye.. “
“that perfect mother every little boy idolises.. & wants to grow up to be like.. the one that will never leave your side.. & stay #4ever.. till the end of time.. & every year she grows younger.. with me.. she’s 65 years young now.. she will continue to live with me.. within me.. to infinity.. & beyond..,” added the ‘Hossana’ star.
Terming his mom as beautiful mama queen, Prateik added, “my beautiful.. mama queen.. my reason.. numero uno.. my #superstar #legend, rest in #love.. in #power.. in #paradise.“
With the post hitting the photo-sharing platform, scores of Prateik’s fans and industry colleagues took to the comments section to show the actor some love.
Amyra Dastur, Ayesha Shroff dropped several heart emojis in reaction to the post.
An iconic actor and style icon, Smita Patil, died at the age of 31 reportedly due to childbirth complications.
The actor appeared in over 80 films in a career that spanned just over a decade. In the year 1985, she also received the prestigious Padma Shri, India’s fourth-highest civilian honour. (ANI)

Disclaimer: The views expressed in the article above are those of the authors’ and do not necessarily represent or reflect the views of this publishing house. Unless otherwise noted, the author is writing in his/her personal capacity. They are not intended and should not be thought to represent official ideas, attitudes, or policies of any agency or institution.