0
CLOSE Seth Rogen is the latest celebrity to use his platform to both support “Black Lives Matter” and criticize those who respond with “All Lives Matter.” USA TODAY Actor Seth Rogen did not mince words in a heated and lengthy Twitter exchange with Sen. Ted Cruz, R-Texas, that covered everything from the Paris Climate Accord to Disney’s…
CLOSE

Seth Rogen is the latest celebrity to use his platform to both support “Black Lives Matter” and criticize those who respond with “All Lives Matter.”

Actor Seth Rogen did not mince words in a heated and lengthy Twitter exchange with Sen. Ted Cruz, R-Texas, that covered everything from the Paris Climate Accord to Disney’s “Fantasia.”

The name “Paris Climate Accord” refers to the city in which the deal was signed in 2015 by leaders of more than 200 nations, including President Barack Obama. Scientists and world leaders say the agreement’s plans for reducing the emissions of greenhouse gases such as carbon dioxide will prevent a dangerous increase in global temperatures. Many Republicans believe the Paris accord unfairly limits American job and economic growth with little concrete return.

He added: “If you’re a rich, angry Hollywood celebrity, today’s Dems are the party for you. If you’re blue-collar, if you’re a union member, if you work in energy or manufacturing … not so much.”

Rogen is in “four unions,” the actor replied.

USA TODAY has reached out to Rogen’s and Cruz’s representatives for further comment.

Why is it called the Paris Agreement? The name has nothing to do with ‘people of Paris’ as GOP politicians suggest 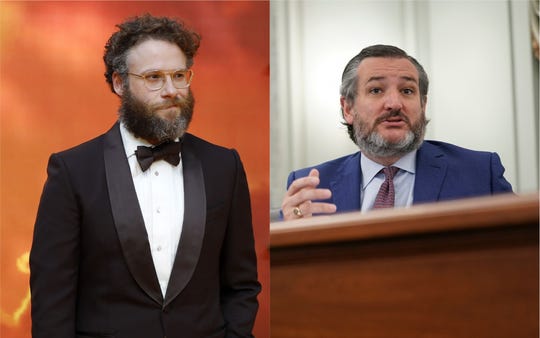 The back and forth continued for several days. Cruz at one point tweeted about how the 1941 Disney film “Fantasia” made him cry when he was 4.

“Everyone who made that film would hate you,” Rogen replied.

Cruz countered, “They’re all dead. So I think we’re good,” and noted that Walt Disney was a Republican. Historians have noted that Disney voted Republican later in his adult life and actively worked with the Motion Picture Alliance for the Preservation of American Ideals, a group of conservatives in Hollywood that stated its mission was to protect the country from fascism and communism.

Cruz added to Rogen: “Even though you behave online like a Marxist with Tourette’s … your movies are typically pretty funny. I’m sure you hate that I enjoy them.”

Rogen noted that Tourette’s runs in his family. “VERY few cases of Tourette’s manifest in uncontrollable swearing. Most cases, like mine, manifest in twitching,” he tweeted.

The National Institute of Health describes Tourette syndrome as a “neurological disorder characterized by repetitive, stereotyped, involuntary movements and vocalizations called tics.” It estimates that only about 10% to 15% of those with the disorder have coprolalia, the “uttering” of “socially inappropriate words” including expletives.

‘You don’t deserve my movies’: Seth Rogen, Ashton Kutcher fire back at ‘All Lives Matter’ comments