To the ballet then, while we can. As London waits to find out whether it will be moved into tier 3, theatregoers rush to enjoy traditional Christmas treats, like escaping into the warm fireside glow of the Royal Ballet’s Nutcracker. Peter Wright’s 1984 production, modelled on Lev Ivanov’s 1892 ballet, is a gorgeous spectacle. Julia…

To the ballet then, while we can. As London waits to find out whether it will be moved into tier 3, theatregoers rush to enjoy traditional Christmas treats, like escaping into the warm fireside glow of the Royal Ballet’s Nutcracker. Peter Wright’s 1984 production, modelled on Lev Ivanov’s 1892 ballet, is a gorgeous spectacle. Julia Trevelyan Oman’s snowy 19th-century designs bring to life pre-Raphaelite angels, vintage toys and a sugarspun palace of delicate sparkle.

This is a necessarily adjusted experience, the audience reduced, and the orchestra, too, down to 44 players from 72, due to social distancing in the pit. Sometimes that doesn’t make much difference, sometimes the depth of sound is missed (perhaps they could pick up the tempo a little in the first act to make up for it). The cast is slimmed down, too, primarily in the children’s scenes and the toy battle, which normally has a chaotic stageful. Here there are six mice and six soldiers, re-choreographed by Will Tuckett, and it works perfectly well. There are fewer snowflakes but they’re very well coached, relevés mechanically synced.

Elsewhere, act two’s Waltz of the Flowers fills the stage with a flow of interweaving patterns and the Rose Fairy Claire Calvert leads with lightness of touch and a swirl of épaulement. It doesn’t feel stingy, is the point. About 15 minutes has been cut, the Spanish and the Arabian dances have gone, although not the doddery grandparents’ dance, sadly – another 10 minutes out of act one wouldn’t be a bad idea. Gary Avis’s magician Drosselmeyer holds court and masterfully holds the whole thing together. 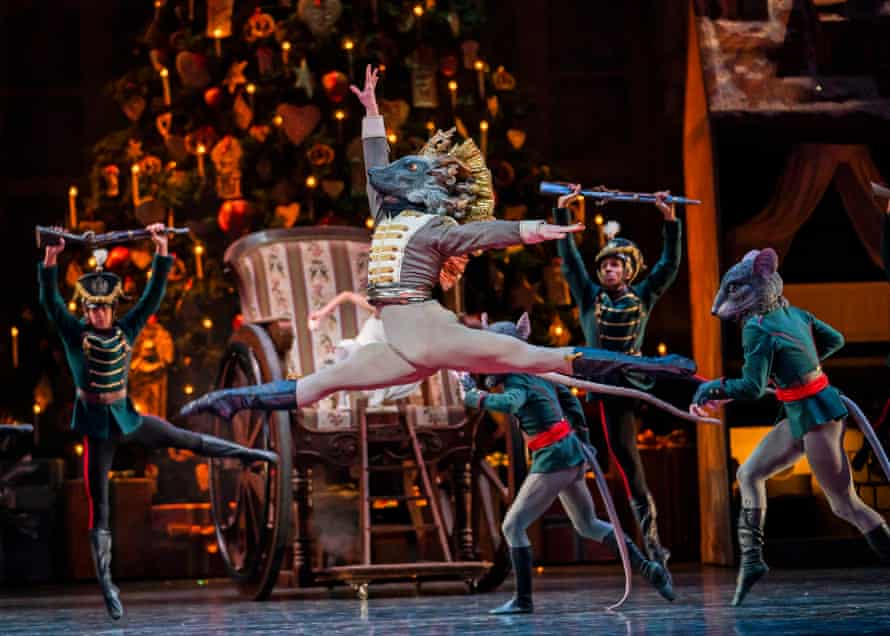 David Donnelly as the Mouse King in The Nutcracker. Photograph: Tristram Kenton/the Guardian

A ballet like this brings its evergreen highlights – and Tchaikovsky’s score, even in reduced circumstances, is the pure sound of a happy Christmas – but when you’re lucky, there are also new delights each year. This time it’s James Hay playing Hans-Peter, Drosselmeyer’s nephew, who is trapped inside the Nutcracker doll. Hay is clean and composed in his technique, but more than that has a gracious, open presence. He’s a natural communicator, responsive to the stage around him and animated in mime when these Nutcracker/hero-type roles can be somewhat wooden (no pun intended). Wright’s production emphasises the budding relationship between Hans-Peter and Clara (Anna Rose O’Sullivan), giving us some wholesomely romantic frisson.

The person who looks as if they’re enjoying this more than anyone is Sugar Plum Fairy Marianela Nuñez. Relaxed and playful in the way you can be when you no longer have to worry about the steps (I was at the Royal’s 499th Nutcracker performance and Nuñez has danced a fair few of them), it appears as if she’s making real-time decisions about how to treat every move: fast, slow, sharp, smooth, and her pleasure is irresistible. She’s partnered by Vadim Muntagirov, who wows with his purity of line, sissones suspended in the air, centre of gravity unwavering. He brings the sense of things clicking into place, the planets aligning.

The on-stage energy may be measured and the theatre experience not the full package (no mingling, no drinks, although you can still get an ice cream), but this Nutcracker brings beauty aplenty and this is a glimmer of joy breaking through the grey.