0
The season 10 finale of The Walking Dead finally arrived in October and proved to be an explosive episode that was worth the wait. While there are still a few “bonus” episodes to come, fans are now looking towards season 11, which is set to be the long-running AMC show’s last outing, with Maggie returning…

The season 10 finale of The Walking Dead finally arrived in October and proved to be an explosive episode that was worth the wait.

While there are still a few “bonus” episodes to come, fans are now looking towards season 11, which is set to be the long-running AMC show’s last outing, with Maggie returning for what could be an epic showdown with Negan, according to actress Lauren Cohan.

It’s possible that the upcoming season will look a bit different to usual with the coronavirus pandemic ongoing, however showrunner Angela Kang has revealed that the team are “thinking outside the box” to find ways of making the zombie-filled show possible.

And for fans dreading the end of The Walking Dead, you’re in luck – various cast members teased potential spin-offs during the show’s New York Comic Con panel, with Daryl, Carol and even Maggie rumoured to become stars of their own shows.

When is The Walking Dead season 11 released?

It could be a while before we have any precise details about the release date for season 11, but it’s expected that the season will begin in late 2021, with the second half airing in 2022.

The season is set to be epic in length, with as many as 24 episodes split into two separate batches, and we’ll let you know as soon as we get news of the official release dates.

Before then, though, fans have some extra season 10 episodes to look forward to – with six bonus episodes having been announced in July. Showrunner Angela Kang recently told RadioTimes.com and other press that, the episodes would “dive really deeply into some of these characters that we have. It’s a kind of focused, almost more anthology-like storytelling in some of them.”

Is The Walking Dead season 11 the final season?

Yes, unfortunately the main Walking Dead storyline will finish with the 11th season – but there’s still a lot more to come from the franchise in general.

When the announcement was made revealing that the eleventh season would be the last, a further two spin-off shows were announced, joining the pre-existing Fear the Walking Dead and the upcoming  The Walking Dead: World Beyond, while a series of Rick Grimes spin-off movies are also in the pipeline.

Scott Gimple, Chief Content Officer for the Walking Dead franchise said: “It’s been 10 years ‘gone bye;’ what lies ahead are two more to come and stories and stories to tell beyond that.

“What’s clear is that this show has been about the living, made by a passionate cast, team of writer/producers, producers, and crew, bringing to life the vision put forth by Robert Kirkman in his brilliant comic — and supported by the best fans in the world.

“We have a lot of thrilling story left to tell on TWD, and then, this end will be a beginning of more Walking Dead — brand new stories and characters, familiar faces and places, new voices, and new mythologies. This will be a grand finale that will lead to new premieres. Evolution is upon us. The Walking Dead lives.”

“I think it’s great that people are getting excited and have something to look forward to,” actress Melissa McBride said. “Daryl and Carol do have a lot of fans out there, [who] had even talked about how fun it would be to see them have a spinoff. I’m excited!”

“All these characters have gotten to the point where they can deal with, and sometimes not deal with, each other in our small group,” Reedus added. “When you take these two characters and put them on the road and they go see who’s left out in the world, how do you … it’s like coming out of prison, sort of. You kind of have to re-adapt to people.”

Meanwhile, Lauren Cohan, who plays Maggie in the series, told Entertainment Weekly that there are “murmurings” of a potential series focussing on her character.

“I know that there are murmurings of an extended story with Maggie when the official mothership is done. And so just like you and I talked about a year or two years ago now, whatever it was, that’s cool,” she said.

Barring any surprise exits in the six “bonus” episodes set to round off season 10, you can expect all of season 10’s main cast to return for The Walking Dead’s final run, including: Norman Reedus as Daryl, Melissa McBridge as Carol, Christian Serratos as Rosita, Josh McDermitt as Eugene, Seth Gilliam as Father Gabriel, Ross Marquand as Aaron, Khary Payton as Ezekiel, and Jeffrey Dean Morgan as Negan.

It’s also likely that Lauren Cohan will play a major part as Maggie Rhee after she returned to the show in dramatic fashion in the season 10 finale two years after leaving the show.

And there have even been some rumours that Andrew Lincoln could return as Rick Grimes, with Reedus saying that he’s tried to convince his former co-star to return for the final season.

We’ll let you know when it becomes clear which other actors will be starring in the final season – with both new and returning characters likely to feature.

With 24 episodes ahead, it seems likely that the final season isn’t exactly going to be light on action and drama.

At this stage of proceedings plot details are quite hard to come by, but it’s probable that the season will focus on the introduction of The Commonwealth and the aftermath of The Whisperer War.

And fans are unlikely to find too many hints about what might happen by looking at the comic book source material – the TV show has already strayed pretty far from the plot of the comics.

However, showrunner Angela Kang teased at New York Comic-Con’s recent The Walking Dead panel that the producers have been having to “think outside the box” when it comes to COVID restrictions.

“It’s not going to be that kind of thing because we can’t have 300 zombie extras and people [with] faces smashed together, with mouths all over the place,” she said. “But, the thing that’s been really cool is we’ve had to think outside the box. Like, how to make things still feel really scary and really cool and really emotional, while being a little more cognisant of, like, how many people are in a scene.”

“Like, are there ways to do this where people are not constantly in each other’s faces? Hopefully, when the audience watches it, they won’t really feel the things we’re doing.” 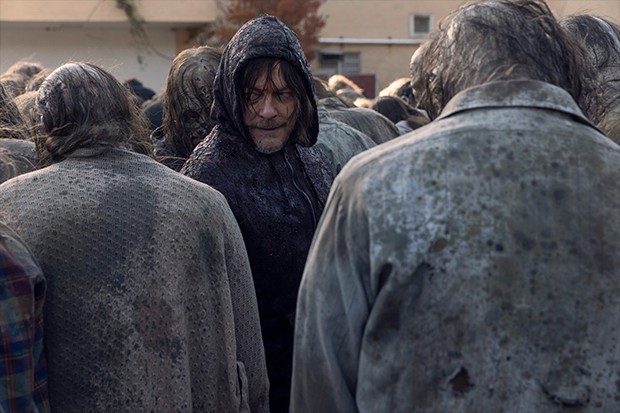 She added that they’ll be diving “really deeply into these really cool character stories” in the upcoming episodes, but wouldn’t give away any clues to which characters they might be.

“We’ve got definitely a story that a lot of comic book fans have been waiting for for a very long time, and I love this script. So, you know, we’ll get to tease things in a different way. There are limitations but I think it’s also been a really cool creative challenge at the same time.”

When season 11 does come around, we’re bound to see some friction between Maggie (Lauren Cohan), who returned to the show for the season 10 finale, and Negan (Jeffrey Dean Morgan), who killed Maggie’s husband Glenn in season seven.

Speaking to Entertainment Weekly, Cohan revealed: “I haven’t been privy to these saving graces of Negan’s or his great relationship with kids or his affinity for animals. I don’t know any of this. And even if I did… So, it’s going to be a lot.”

She added: “It’s definitely going to be a lot when she comes back. I’m so jonesing to get into it. It’s really, it’s fricking great. And I couldn’t be doing it with anybody more fun than Jeffrey [Dean Morgan]. It’s just, we’re really amped. It’s great.”

We’re still a while away from the release of the season so no trailer is forthcoming just yet – but we’ll let you know as soon as one becomes available!

Check out what else is on with our TV Guide.