4 Reasons Why You Can Never Invest Like Warren Buffett

0
Wait, hold on, I heard you want to invest like Warren Buffett?   Well, there’s absolutely nothing wrong with it. In fact, it’s the most sensible thing you can do.   Warren Buffett, as we all know, is the greatest and most respected investor of all time. Famous not only because he has made himself… 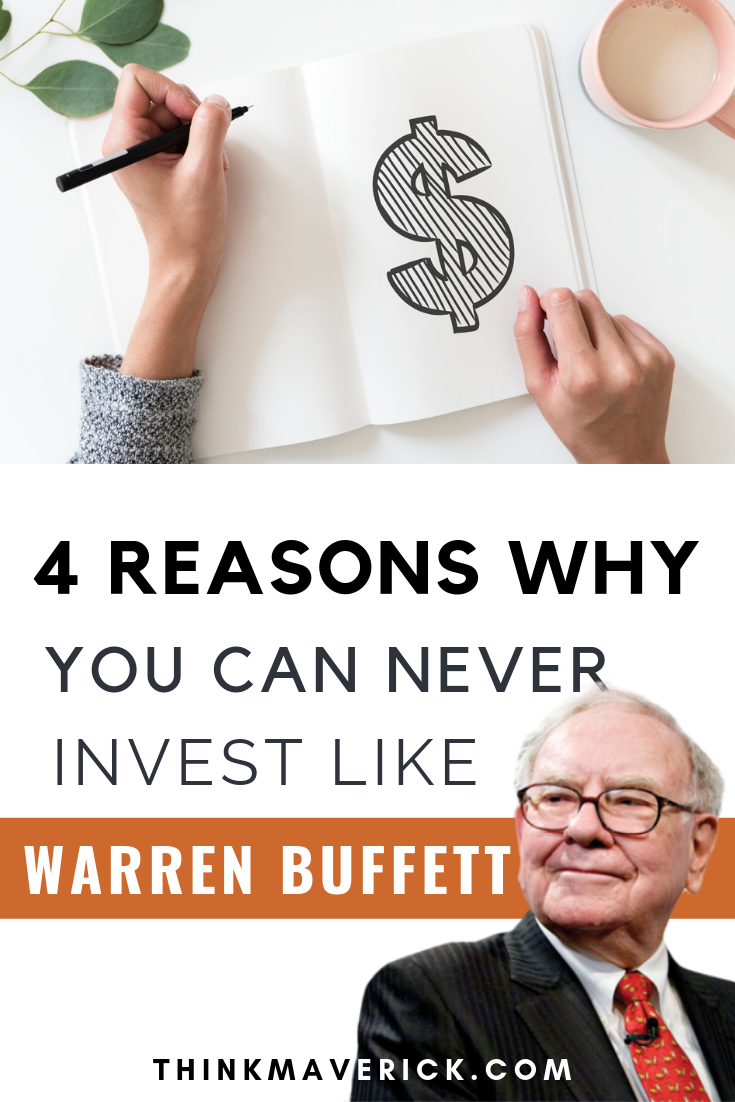 Wait, hold on, I heard you want to invest like Warren Buffett?

Well, there’s absolutely nothing wrong with it. In fact, it’s the most sensible thing you can do.

Warren Buffett, as we all know, is the greatest and most respected investor of all time. Famous not only because he has made himself a billionaire several times over, but also made his investors massive returns.

Also known as the “Oracle of Omaha”, Warren Buffett is the CEO, chairman and largest shareholder of Berkshire Hathaway.

Many people, and I was one of them, wanting to pick apart his success. Attempting to study and replicate his magic formula.

As the famous saying goes, “If you want to be the best you must first learn from the best”.

Just do a quick Google on “Invest like Warren Buffett”, at this writing, you get 7.9 million results!

However, the more I research, the more I read and start going down the rabbit hole, the more I’m convinced that I can’t possibly invest like Warren Buffett. At least, I believe that’s the case for small investors like you and me.

The truth is you may not necessarily benefit by following his every move.

You can’t achieve the success of Warren Buffett by simply buying the stocks Berkshire Hathaway owns or following his investing style.

Here’s the reasons why I think why you can never invest like Warren Buffett.

But people often overlook the fact that Warren Buffett just doesn’t buy stocks like you and me.

A lot of people think “buying low and selling high” is the key to good investment. Well, that’s one side of a coin.

Most importantly, Warren Buffett won’t go out there and buy shares just because Amazon has dropped 5%, 10% or 20% yesterday!

Because Warren Buffett is no ordinary investor.

He is an extremely smart deal maker.

He has ways to get it at a lower price and better terms.

He can get special treatments and deals in his investment that allow him to make a lot more.

So, what exactly does it mean by a deal?

In 2008, the midst of the financial crisis, Goldman Sachs’s stock was crashing.

For average investors, that’s the price you’d get to invest in the stock.

But Warren Buffett’s always one step ahead of the game. He made a phone call and offered a deal that they can’t refuse.

In less than 3 years, Goldman Sachs bought back the share and paying a total of $5.649 billion to Buffett.

Later in the year 2013, Warren Buffett exercised the warrants, in which he paid $115 a share for 43 million shares. At that time, a share was $190. He kept 13.1 million GS shares, sold the rest and got an additional of $2billion in cash!

All in all, Warren Buffett made a whopping $4 billion from this deal.

Buffett also managed to get a deal with General Electric, buying up $6 billion shares and received a special dividend of 10%. He made 1.2 billion on the deal with GE.

That’s the kind of deal that you and I would never have access to in a zillion years.

This brings me to my next point:

Undeniably, being an investor for a large conglomerate has an unfair advantage compared to a private individual investor.

While Warren Buffett buys shares in the millions, small investors can only buy in hundreds.

He has access to information and network, striking incredible deals that most of us can only dream about.

He can move a huge amount of money fast, even faster than a bank.

Needless to say, as an influential leader, he can easily move the market by talking about them.

While it’s possible to follow Buffet’s tenets of long term and value investing, you must be aware that we can only apply them to a certain degree.

3. Pays Little or No Tax

Everyone hates taxes. But our greatest-ever investor always knows how to play it to his advantage.

In fact, his secretary pays more taxes than him!

Because she earned income as an employee.

Because as long as he doesn’t sell the $80 billion worth of Berkshire Hathaway stock that he owns, he doesn’t have to pay any tax. 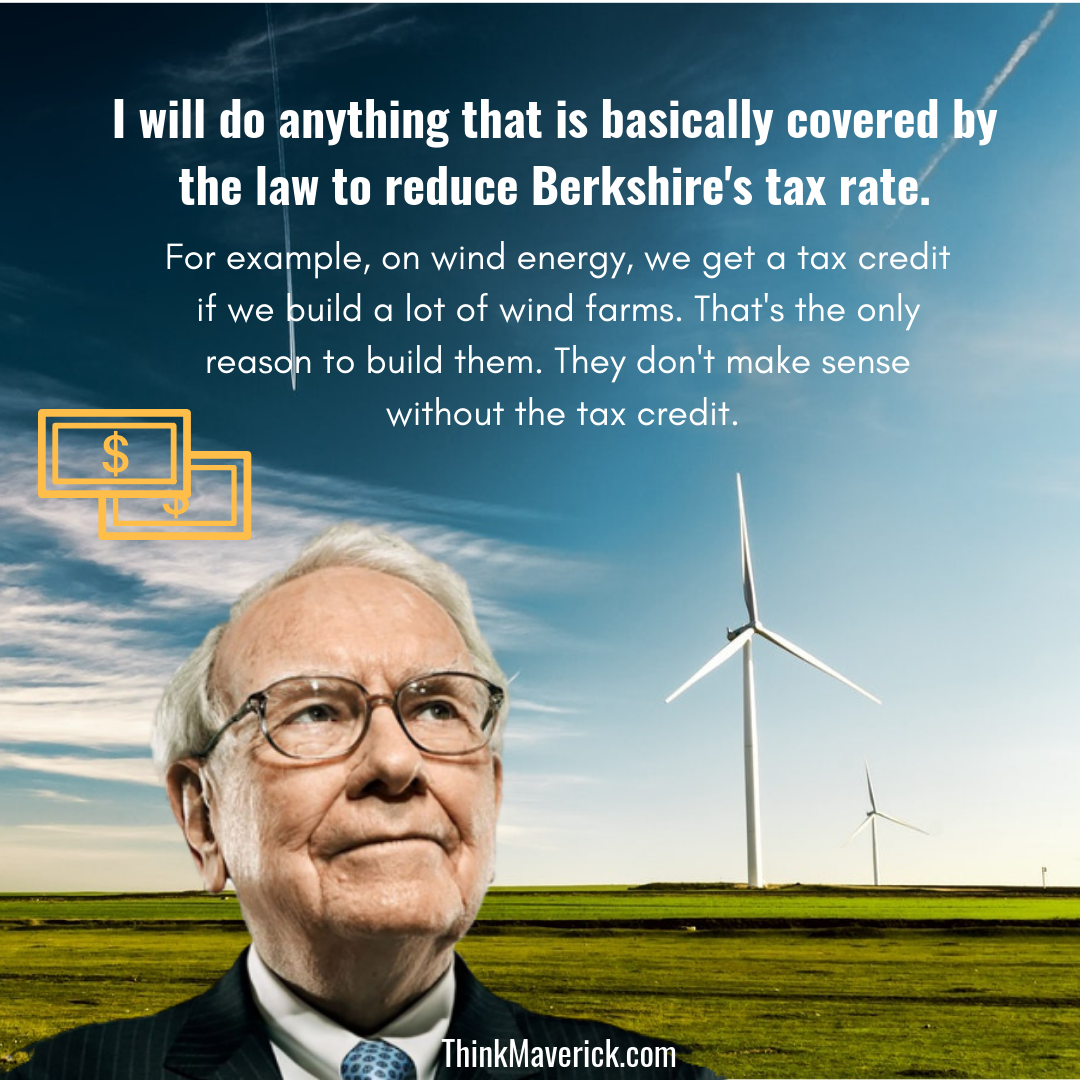 But the truth is, he will do anything to avoid paying taxes!

He said he’s not going to give any money to his children. But what he doesn’t say is that he gave each of his children a $3 billion charitable foundation.

Which they can then easily pay themselves in millions a year from the foundation.

He actively pledges his fortune to Bill and Melinda Gates Foundation and his children’s charities.

You’re right. There must be a good reason behind it.

By doing these, he’ll be able to avoid 40% death tax while giving 100% tax-free money to charities owned by his children.

Also, he wants Congress to raise the minimum tax rate on the upper-middle class to 30%. While his $80 billion goes untaxed.

So, how does it related to investing?

Remember Buffett will do anything to reduce his taxable income and maximize Berkshire Hathaway’s returns.

And he can invest in deals that are unavailable to any investors out there.

For example, Warren Buffett paid $3 billion worth of P&G shares, in exchange for Duracell battery business from P&G.

By using P&G shares as currency during the transaction, Berkshire can avoid paying any tax on the stock gain.

Normal investors buy shares with after-tax dollars but not for him. Buffett can do deals with pre-tax dollars.

Buffett is not a pure value investor. He is a highly sophisticated businessman.

It’s important to know how he created wealth by having his own company, using every loophole in the book to keep his taxable income to the minimum, switch the attention of the Congress to raise taxes on the middle class and immune from the rule while others are getting desperate.

Fun fact 1: He chooses to use a flip phone rather than a smartphone.

Fun fact 2: He doesn’t keep a computer on his desk. But he keeps a World Book Encyclopaedia on his shelf.

Fun fact 3: He doesn’t use email. The first and only email that he sent in his life is to Jeff Raikes of Microsoft.

During the dot-com boom, Warren Buffett shied away from investing in any Internet companies. He admits that he made mistakes of not buying Google and Amazon shares. Till now he still avoids investing in big tech companies such as Facebook, Netflix and Amazon.

He even publicly bashed Bitcoin and recently told CNBC that…

…in terms of cryptocurrencies, I can say almost with certainty that they will come to a bad ending.

It might be a good idea to not invest in things that you don’t understand. But it also means that you might also miss out on some BIG gain over the years. 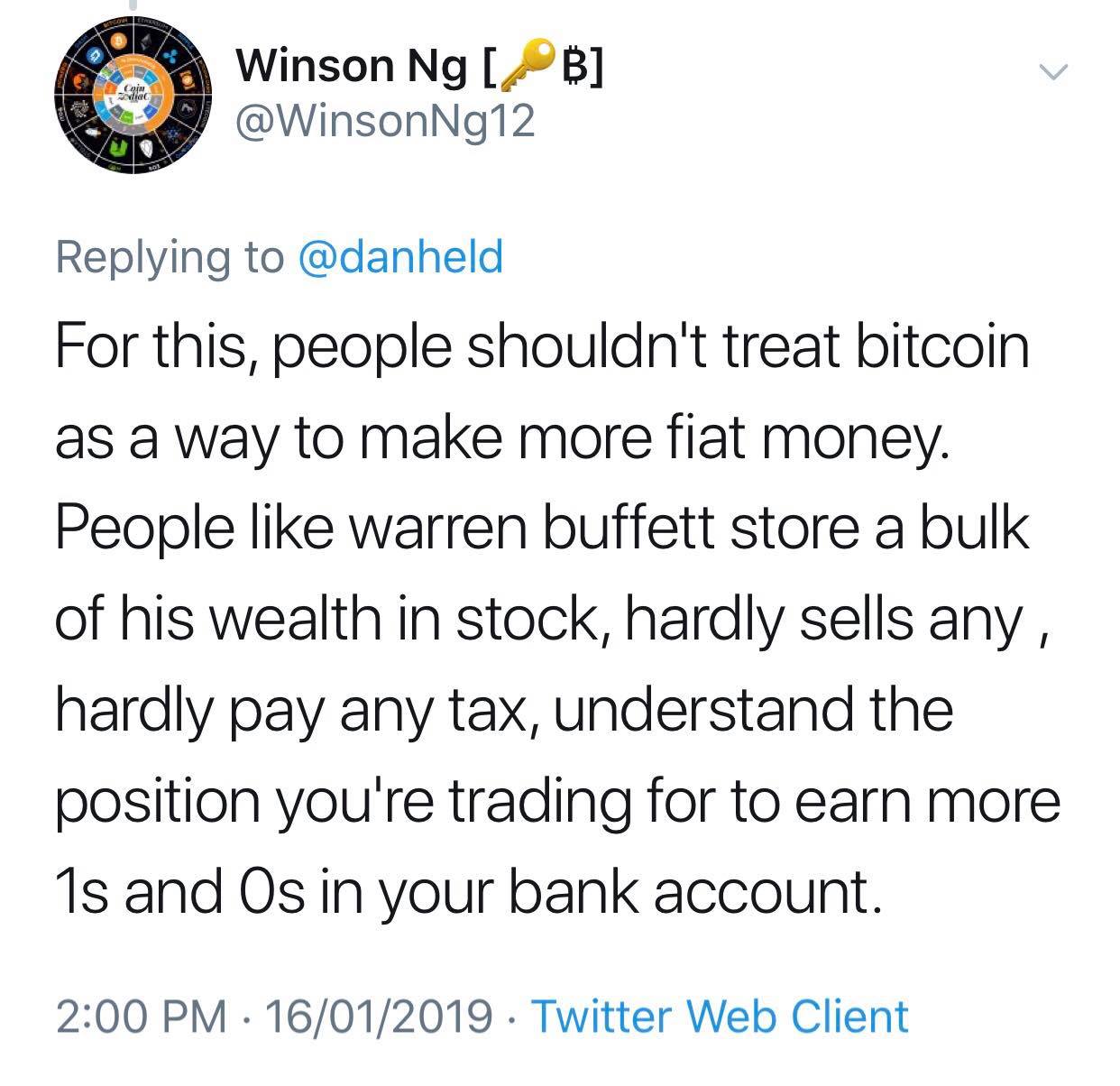 The answer, is often yet another question- will you take advice from someone who have zero knowledge of what he’s talking about?

On a deeper layer, Buffett hates Bitcoin and technology companies simply because they will challenge his near monopoly status and can affect his competitive advantage in many ways.

Bitcoin may put the power of finance back in our hands, not government, banks and monopolizing middleman.

and eBay did it with e-commerce.

In the same way, Cryptocurrency is democratizing money.

Buffett’s investment strategy obviously isn’t the only one that works, albeit his tremendous success in Berkshire.

Don’t let others discourage you from understanding, embracing and even investing in Bitcoin, cryptocurrency and the Future!

If he had taken the money and bought Bitcoin instead, he would have $8.7 Billion.

The bad news is None of us can invest like Warren Buffett.

The good news is We don’t have to be like him to achieve that type of success now.

I live and breath making an income online.

If you haven’t already, sign up here to receive my emails and a free magazine subscription.