0
It’s hard to judge a show like The Walking Dead: World Beyond solely by its premiere, which spent nearly an entire episode establishing the idyllic nature of the Campus Colony in Omaha before wiping the whole damn thing off the map in the closing minutes. In its cliffhanger ending, World Beyond established itself as a… 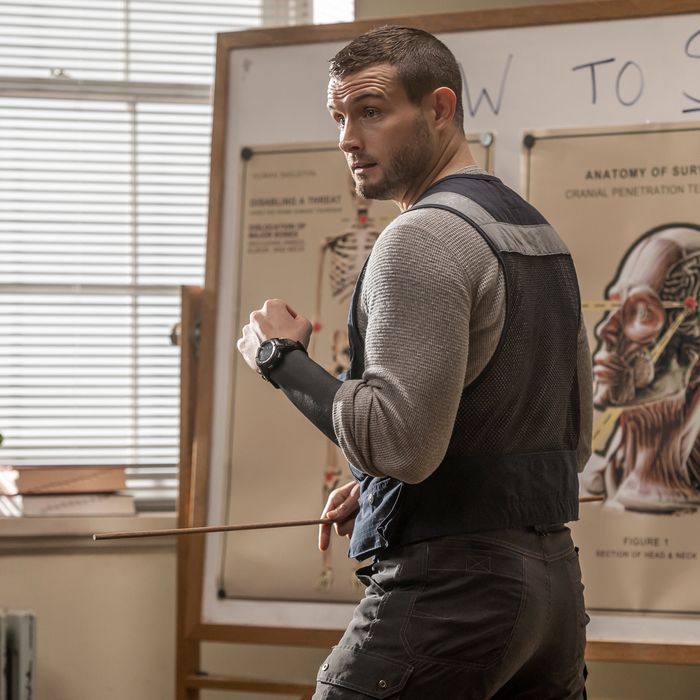 It’s hard to judge a show like The Walking Dead: World Beyond solely by its premiere, which spent nearly an entire episode establishing the idyllic nature of the Campus Colony in Omaha before wiping the whole damn thing off the map in the closing minutes. In its cliffhanger ending, World Beyond established itself as a road show — but we didn’t actually get a sense of what the road was going to look like.

So “The Blaze of Gory” is an instructive, consequential episode, setting the template for what a standard episode of World Beyond is going to look like. And I’m happy to report that that template looks pretty promising.

First and foremost, this episode makes the wise choice to let the kids at the center of this story act like actual kids. Iris and Silas shyly flirt about the type of music they’re into. Hope and Elton have an (understandably) angsty conversation about the existential despair they’ve felt growing up at the end of the world. The whole gang spends a night in a treehouse and indulges in a game of Monopoly. They even develop their very own inside joke, which is hilarious to the four of them but impossible to explain to anybody else. (Big Moe!)

These scenes have a natural, lived-in authenticity, and I think I’d honestly be content with a version of World Beyond that was just a hangout show about kids at the end of the world. But there’s a whole Walking Dead mythology this show remains tied to, so the back half of the episode pivots toward the long road that will eventually lead these kids to the secret CRM base in New York.

This week’s big obstacle is a tire fire. I mean an actual, literal tire fire. (Apparently these kids aren’t scared of on-the-nose metaphors.) It’s called the Blaze of Gory, because terrible puns also survived the apocalypse. And to the residents of the Campus Colony, it’s famously useful, because the smoke tends to attract the zombies in the area and keep them away from the people.

Unfortunately, the Blaze of Gory also sits squarely between the kids and New York, which means they’ll either need to cut through it or take a lengthy detour around it. Given the archetypes established in the premiere, you’d probably expect Iris to push for the long road and Hope to insist on the shortcut — but interestingly, it’s rebel-without-a-cause Hope who favors taking the 60-mile trek around the fire, and by-the-book Iris who favors cutting straight through. (Of course, this is a TV show, so Elton and Silas ultimately vote for the shortcut, which also happens to be the option that’s going to be way more fun for us to watch.)

All the while, Felix and Huck follow behind, following a trail of breadcrumbs so obvious Felix suspects one of the kids has decided they want to be found. But the route also gives Felix the chance to get his own closure. In a series of flashbacks scattered throughout the episode, we get Felix’s own poignant backstory. When Felix was a teenager, his deadbeat father discovered Felix was gay, and threw him out of the house for good. When the apocalypse broke out, Felix attempted to return home, only to be rebuffed by his parents from behind their locked door.

Back in the present, Felix approaches his childhood home for the first time in years, and hears the zombies groaning from behind the locked door. When he breaks in and kills his own zombified parents, it’s hard to gauge if it’s an act of mercy or an act of rage or both — but either way, it seems like he’s achieving some much-needed closure here.

And it’s a good thing that somebody does something productive this week — because at the end of the episode, the kids discover, inevitably, that they might be in over their heads. The smoke from the Blaze of Gory makes it impossible to navigate, and the gang ends up stuck in the middle of a zombie horde. Surrounded on all sides, Elton comes up with a Hail Mary: Cutting through the crowd to set off an old tornado siren that will draw the zombies away.

While there are, understandably, no immediate volunteers for this job, Hope eventually decides that this is a prime opportunity for her to step up as well. While everyone else is sleeping, she grabs a walkie-talkie and slips off into the smoke. Hey, no one said being the hero was easy.

• Following the conversation about how the zombie apocalypse is likely an extinction event for the human race, Hope and Elton christen their little group “The Endlings,” after the scientific term for the end of a species. (A friendly suggestion: Don’t click on that link unless you’re ready to be super bummed out!)

• At some point World Beyond is gonna need to do a time/geography jump, right? Maybe between seasons one and two? Because there are 18 episodes left in this series, and the Endlings seem to have completed about eight miles of their 1,100-mile journey.

• Hope apologizing to a zombie after Iris barfs on it is a nice callback to the pilot of the original Walking Dead, when a far less jaded Rick Grimes apologized to a zombie before killing it.

• The CRM may have turned out to be duplicitous, murderous traitors, but at least our gang got some canned peaches out of the deal.

• Even by the slackened standards of fun in the post-apocalypse, a game of Monopoly looks way too long and boring.

• World Beyond is really committed to making “The Night the Sky Fell” a thing, huh?

• Elton says a zombie’s anatomy is like “a bag of ravioli and candy canes.” Evocative!

Keep up with all the drama of your favorite shows!